Vaccination drive has begun around the world And the USA has reported nearly 20% vaccination done by the month-end. But shockingly, 40% of marines have declined to take the vaccines.

Captain Andrew Woods of Communication Strategy and Operations said that 123,500 Marines have access to the vaccination. Out of these many, 75,000 has taken the vaccine doses either partially and taken one shot only. And remaining 48,000 have refused to sign up for this.

Why are marines refusing to take up the shot?

The officer has not stated all the reasons that have led to the refusal by marines. But he said that some officers believe that it is not mandatory to take the vaccine. Therefore, until it is a command from the higher authorities, they will refuse the vaccine shots. Other officers are waiting for others to get the vaccine first, and some have received the doses from other sources.

“We fully understand that widespread acceptance of the COVID-19 vaccine provides us with the best means to defeat this pandemic. The key to addressing this pandemic is building vaccine confidence,” the officer said, confirming a statistic first reported by CNN.

The Marine corps are working to educate the fellow marines, sailors, and other beneficiaries. They are organizing awareness programs and giving information concerning the safety of vaccine shots.

“We continue to make the vaccine available to Marines, Sailors, civilians, contractors, and authorized beneficiaries based on the prioritization schedule listed in the [Department of Defense] population schema,” Wood said.

There is a far higher declination rate at marine bases. CNN also reported earlier in March that there is a 50% declination. Covid vaccines are not mandatory to take by any armed officer as they have only emergency use authorization. Authorization of vaccine shots is by the Food and Drug Administration, and that the reason military cannot make this vaccination drive mandatory at its military bases. 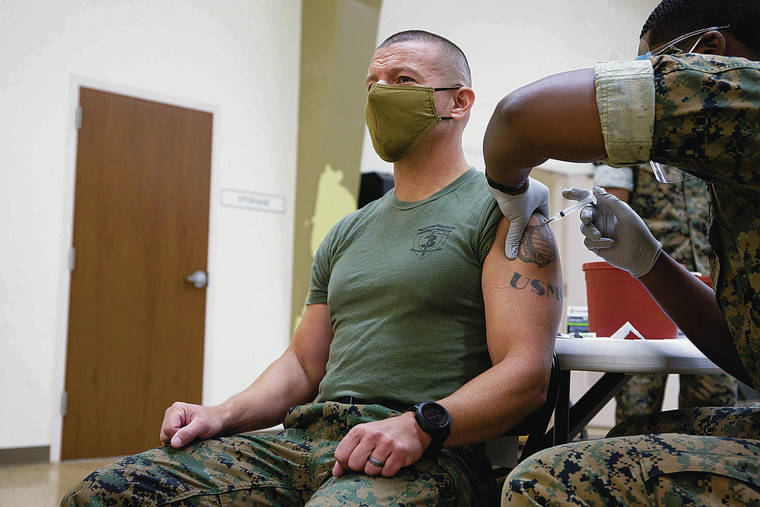 40% Marines in the USA refuse to take the vaccine shots!

15
April 13, 2021
Previous articleApple faces supply crunch! But Why?
Next articleAll About BAFTA 2021: Who won the major awards?